[Apologies: I lost this somewhere in the computer last autumn! AR] 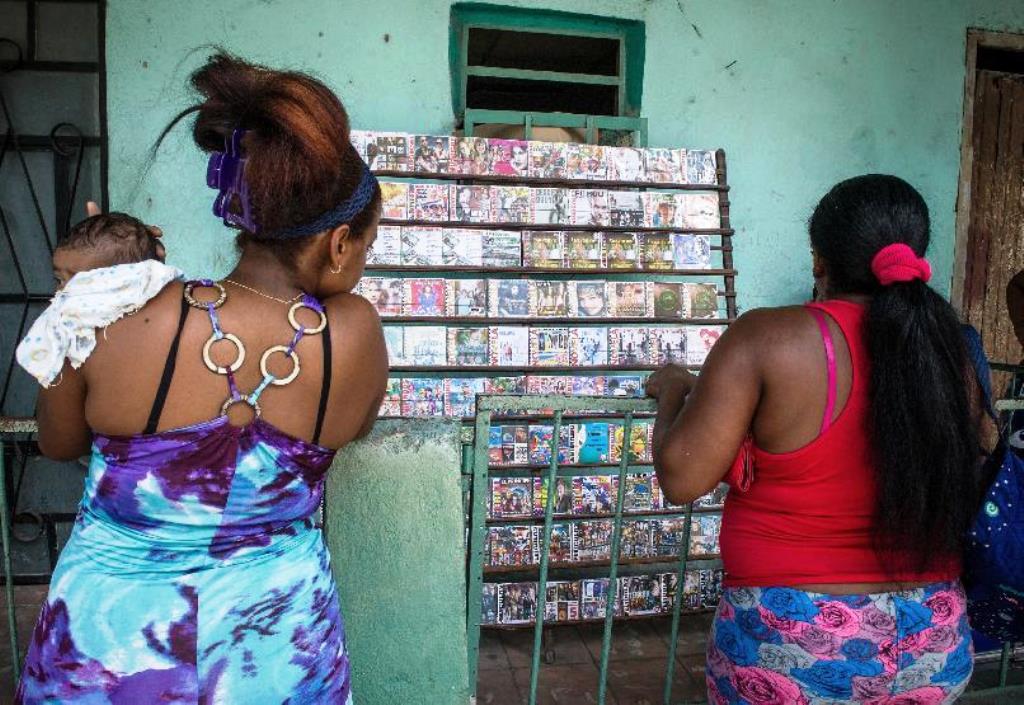 From foreign DVDs to perfume, rum and coffee, Cuba’s shelves are packed with pirated and counterfeit goods, which are sold as authorities turn a blind eye — using the longstanding US embargo as justification.

The more than 50-year US trade freeze with communist-ruled Havana has bred a healthy appetite for smuggled goods, including TV series, films, music and software — all available at a low cost.

“Here, everything costs one CUC,” the Cuban convertible peso equivalent to one US dollar, explains 28-year-old vendor Jorge, standing before three bookcases packed with CDs and DVDs.

In southern Havana’s October 10 neighbourhood, where Jorge peddles his wares, pirated DVDs featuring current American blockbuster films, children’s movies and Latin music are all on sale to delighted crowds. For Jorge, the cost of doing business is affordable. For 60 Cuban pesos ($A2.59) a month, he can buy a vendor’s licence to sell his goods.

He is one of half a million Cubans who work in the 200 or so independent jobs authorised under President Raul Castro’s economic reforms. Though buying and selling pirated goods is technically illegal in Cuba, the trade is widely known and mostly tolerated, even by the Committee for the Defence of the Revolution officers who rarely punish vendors.

“I pay for my licence on time and no one interferes with my work,” said Jorge, who declined to give his full name.

Like many other merchants, Jorge’s stock extends far beyond entertainment DVDs. He also sells “packages,” which feature hundreds of megabytes of data obtained weekly from overseas sources.

The bundles include television series, sports programs, films, anti-virus software and up-to-date listings from the banned classified sites “Revolico” and “Porlalivre”. The online classified listings, which are officially banned in Cuba, offer interested buyers anything from air conditioners to black market tyres, and even empty perfume bottles to be secretly refilled in off-the-grid factories.

With the help of complicit employees, some of the black market fragrances and other items even find their way to the shelves of government-owned stores.

Authorities struggle to contain this Cuban “tradition,” which emerged during the dark days of severe shortages in the early 1990s following the collapse of the Soviet Union, one of Cuba’s staunchest Cold War-era allies.

“The new situation in the 1990s was so sudden, so violent, so unexpected… that people started, with the only means they had, to find ways to fulfill their needs,” said sociologist Mayra Espina in the online newspaper Cuba Contemporanea.

This time of shortages bred a social phenomenon called “la lucha,” or “the struggle,” which has seen Cubans do whatever is necessary to tackle the island nation’s social and economic malaise, Espina said.

Pirated programs have also crept into the state’s sphere, with public media and government-owned cinemas running illegally-obtained shows and films. Some television networks lacking their own means to produce original programming have “resorted for years to carrying shows from American channels without paying for the rights,” Cuban TV director Juan Pin Vilar told AFP.

Indeed, this is one of the fringe benefits of the US embargo — the Cuban TV channels and cinemas could act with virtual impunity, as legal repercussions were unlikely.

“There is a kind of tactical willingness (in the US) not to bother Cuba because culture… is a very effective means of communication,” said Jorge de Armas, a member of a group of Cuban exiles calling for a rapprochement with Washington.

But the flip side, according to Vilar, is that certain stations in Miami — home to most of the Cuban diaspora — air Cuban programs to satisfy their viewers, nostalgic for home. On Miami’s “Calle Ocho,” or 8th Street, in the heart of Little Havana, the Maraka shop sells pirated music, films and television programs brought in from Cuba.

On the other side of the Florida Straits, the international Cuban television network Cubavision offers its signal to satellite suppliers around the world. The idea, said one Cubavision executive, is “to spread our image”.