THE UNITED STATES AND CUBA: AT LAST, A THAW! HISTORIC STEPS TOWARDS ENDING AN ANACHRONISTIC EMBARGO 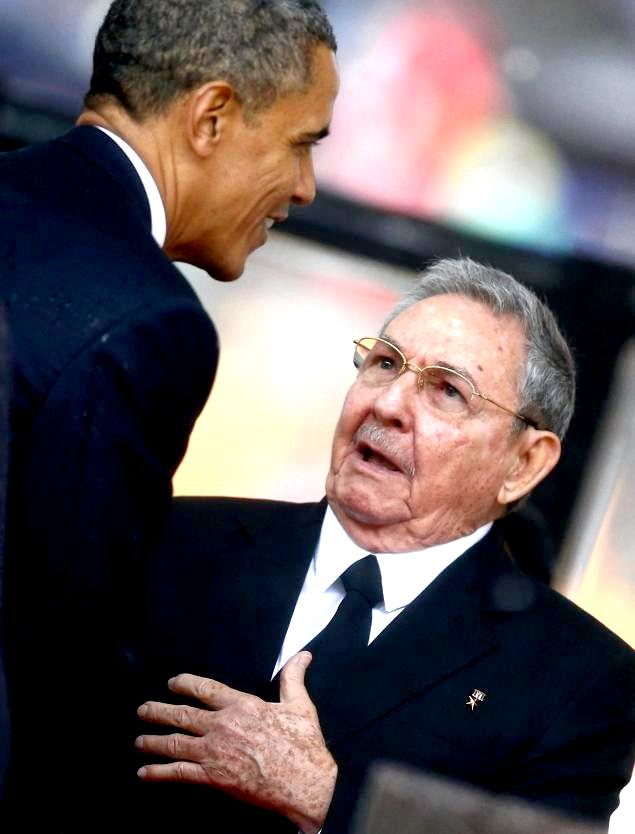 IT HAS long been one of the great anomalies of American foreign policy. The United States normalised relations with Communist China and even with Vietnam, with which it fought a bitter war costing more than 50,000 American lives. But ties with Cuba, which long ago ceased to pose any threat to America, remained frozen in the Cold War. Maintaining the economic embargo against the communist island first imposed in 1961 was about revanchism and Congressional politics, not foreign policy.

On December 17th Barack Obama announced sweeping changes which go a long way to bring policy towards Cuba into the 21st century. The two countries will start immediate talks on restoring diplomatic relations and re-opening embassies. The president will use his executive authority to loosen the ban on travel to the island; raise the limit on remittances to ordinary Cubans and their small businesses from $500 per quarter to $2,000; and allow exports of building materials, farm equipment and telecommunications gear. Americans will be able to use their credit and debit cards on the island. The administration is also preparing to remove Cuba from its list of states that sponsor terrorism.

These announcements followed 18 months of secret talks in Canada between American officials and the government of Raúl Castro, who replaced his elder brother Fidel as Cuba’s president in 2008. The talks were encouraged by Pope Francis. They culminated with a 45-minute phone call between Mr Obama and Mr Castro on December 16th.

The biggest stumbling block to any change in the embargo was the incarceration of Alan Gross, a worker for the United States Agency for International development, who was jailed in 2009 for handing out satellite-communications gear on the island. Mr Gross, who is in very poor health, was freed on December 17th (he is pictured below with his wife, Judy, after his release). Freed too, and sent to the United States, was a Cuban whom Mr Obama said was “one of our most important intelligence agents”, as well as 53 Cuban political prisoners from a list provided by the United States. In return, the United States has released three Cuban spies serving long sentences after being arrested in 2001 for snooping on exiles and American military bases in Florida.

In seeking to normalise diplomatic relations, the administration recognised what has long been clear to the outside world: the embargo has manifestly failed to topple the Castros. Under Raúl Castro change has slowly started to come to Cuba from within. Private farmers, small businesses and co-operatives now make up around a fifth of the island’s labour force.

The United States’ Cuba policy also put it at odds with the whole of Latin America, which now favours normal ties. Mr Obama said he would attend the Summit of the Americas in Panama in April, to which Mr Castro has also been invited. He said he would continue to press for human rights and democracy in Cuba.

As for Mr Castro, it is not hard to see why he is interested in closer ties with the United States. For the past dozen years, Cuba’s moribund economy has been propped up by subsidies from Venezuela, mainly in the form of cheap oil. The fall in the oil price has pushed Venezuela’s economy into a deep recession. The approval rating of its president, Nicolás Maduro, has plunged to 25%, casting uncertainty over the durability of Venezuelan aid. Mr Castro said the agreement to restore diplomatic relations “doesn’t mean that the main thing [ie, the embargo] has been resolved”.

Only the United States Congress can repeal the embargo. What Mr Obama has done is remove some of its teeth. The president can count on public opinion in this issue, which in recent years has swung against the embargo. In an apparent attempt to mollify the pro-embargo camp, the administration recently dropped its previous opposition to a bill, approved earlier this month, imposing targeted sanctions against Venezuelan officials involved in repressing opposition demonstrations earlier this year. But none of this will assuage the president’s conservative critics in Congress. Mr Gross considered himself a “hostage” rather than a prisoner, and Mr Obama’s opponents pounced on the swap as endangering American lives, as well as coddling a dictator.

Just how far détente between the United States and Cuba will go is not yet clear. “I don’t expect a transformation of Cuban society overnight,” said Mr Obama. But he is surely right in saying that after half a century of failure in trying to isolate Cuba, it is worth trying to promote change there through engagement.