The Venezuelan Dialogue From a Cuban Point of View

Original here: The Venezuelan Dialogue From a Cuban Point of View

The dialog between the Venezuelan opposition and Nicolas Maduro is in full swing. Its critics are many, its most visible loser: the Cuban government. For a system that for more than half a century has disqualified and reprimanded its dissidents, this discussion table must present a sad acknowledgement of its own inabilities.

Last Tuesday stunned Cuban viewers could watch a debate between the opposition forces in Venezuela and pro-government representatives. The controversial meeting was broadcast on TeleSur, which is characterized by its tendency to back the work of Chavism with its reporting. On this occasion, however, it was forced to also broadcast the concerns and arguments of the other side.

The requirement that cameras and microphones would be present at the discussion proved to be a magnificent political move by Maduro’s adversaries. In this way the audience is engaged in the dialog and it’s more difficult to publish distorted versions later. The participants on both sides were allowed ten minutes each, an exercise in synthesis that the Venezuelan president, clearly, couldn’t accomplish.

For disinformed Cubans, the first thing that jumped out at us was the high level of the arguments the opposition brought to the table. Figures, statistics and concrete examples expressed within a framework of respect. The next day the most commonly heard comment in the streets of Havana was the popular phrase, “They swept the floor with Maduro.” A clear reference to the crushing critiques of his rivals. The government supporters, however, were notably timid, fearful, and offered a discourse plagued with slogans.

There is no doubt, this discussion table has been a bitter pill to swallow for those who up until a few hours before were accusing their political opponents of being “fascists” and “enemies of the nation.” Venezuela will no longer be the same, although the negotiations end tomorrow and Nicolas Madura will once again take the microphone to hand out insults right and left. He acceded to a discussion and this marks a distance between the path followed by the Plaza of the Revolution and another that recently began for Miraflores. 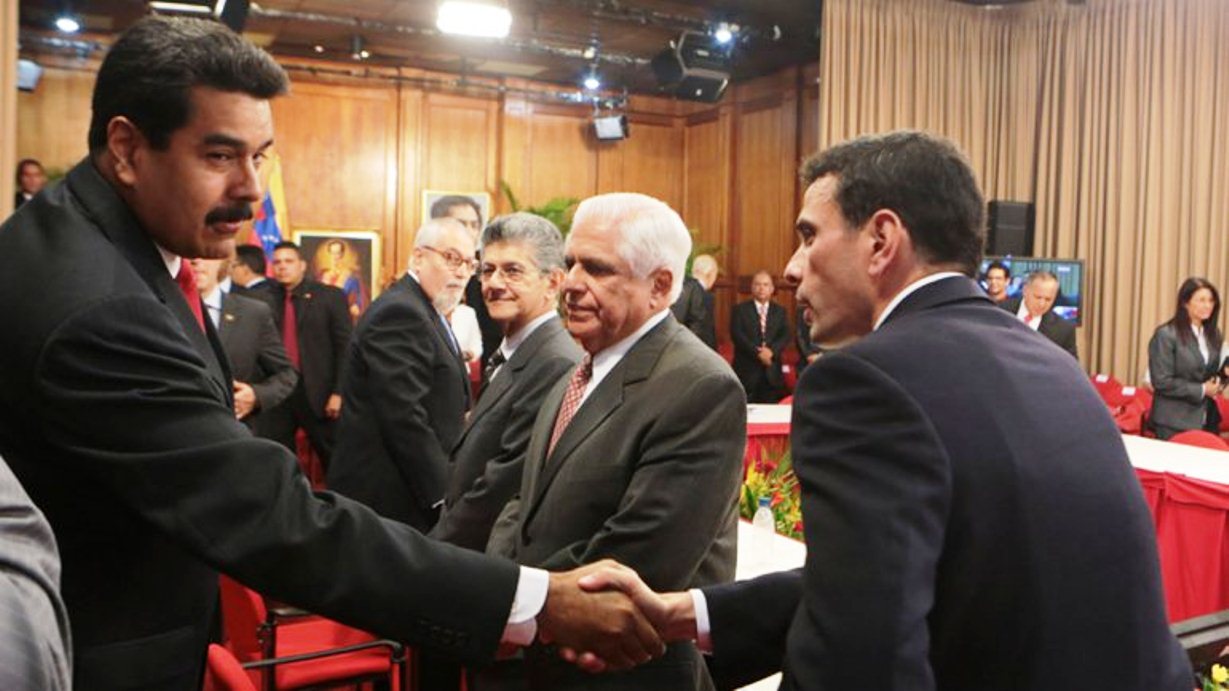 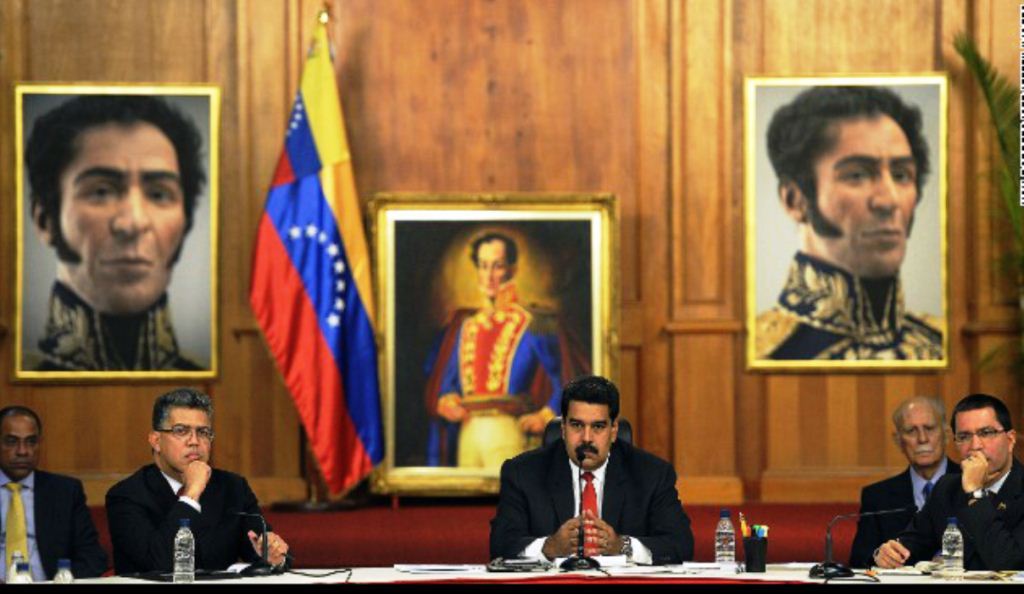 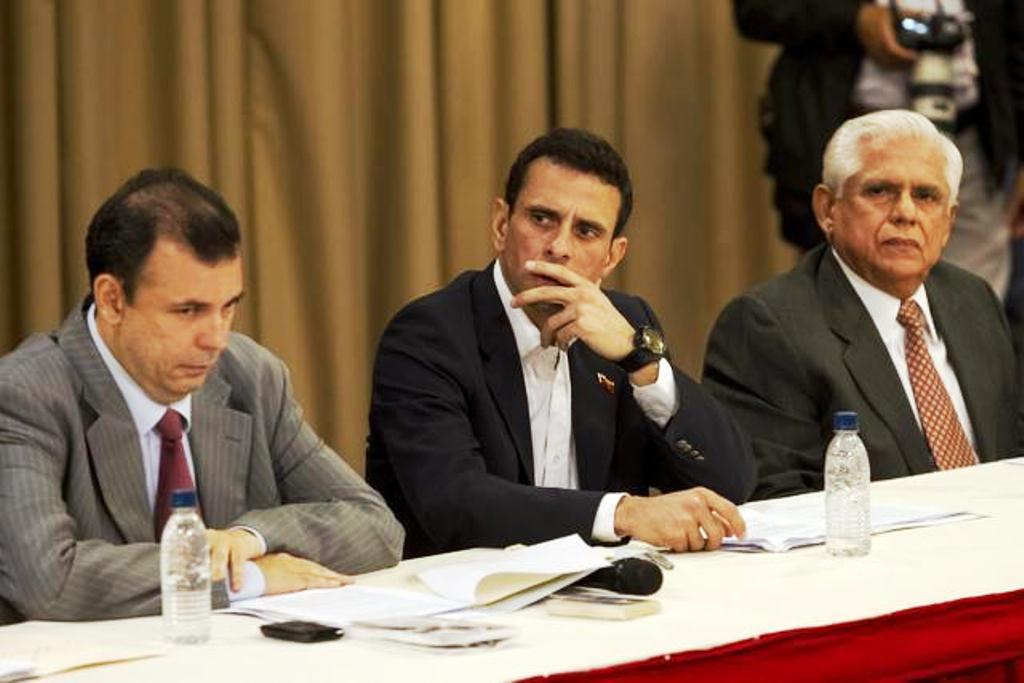 The Opposition, Caprilles in the middle

And in Cuba? Is this also possible?

While the broadcast of the Venezuelan dialogue was airing, many of us asked ourselves if something similar could occur in our political scenario. Although the official press presents these conversations as a sign of strength on the part of Chavism, it has also kept enough distance so that we won’t get illusions of possible Cuban versions.

It is less chimeric to imagine Raul Castro getting on a plane and escaping the country than to project him sitting at a table with those he dubs counterrevolutionaries. For more than five decades, both he and his brother have been dedicated to demonizing dissident voices, such that now they are prevented from accepting a conversation with their critics. The danger posed by the impossibility of negotiations is that it leaves only the path to an overthrow, with its consequent trail of chaos and violence.

However, not only do the Cuban regime’s principal figures show reluctance before any negotiating table. The better part of the Island’s opposition doesn’t want to hear it spoken of. Before this double rejection, the agenda of a chimeric meeting fails to take shape. The opposition parties haven’t yet come together on a project for the country that can be coherently defended in any negotiation and look like a viable alternative. We members of the emerging civil society have reasons to feel concerned. Are the politicians now operating illegally in the country prepared to sustain a debate and capable of convincing an audience? Could they represent us with dignity when the time comes?

The answer to this question will only be known once the opportunity arises. Until now the Cuban political dissidence has concentrated more on tearing down than on elaborating foundational strategies; the greater part of their energy has been directed to opposing the governing Party rather than on persuading their potential followers within the population. Given the limitations on disseminating their programs and the numerous material restrictions they suffer, these groups have not been able to carry their message to a significant number of Cubans. It is not entirely their responsibility, but they should be aware that these deficiencies hinder them.

If tomorrow the table for a dialog was set, it would be unlikely that we would hear a speech from the Cuban opposition as well articulated as that achieved by their Venezuelan colleagues. However, although negotiation isn’t a current possibility, no one should be exempted from preparing for it. Cuba needs for the people before those possible microphones to be those who best represent the interests of the nation, its worries, its dreams. They may speak for us, the citizens, but please, do so coherently, without verbal violence and with arguments that convince us. 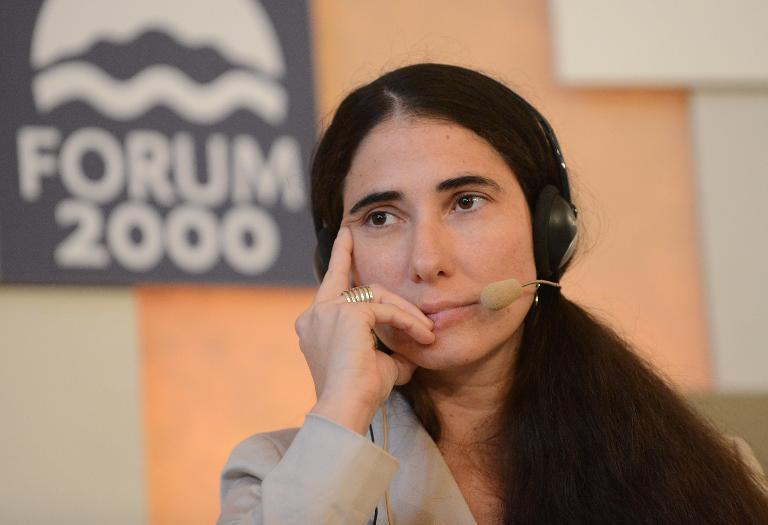 This entry was posted in Blog and tagged Cuba-Venezuela Relations, Politics. Bookmark the permalink.