Yoani Sanchez on Raúl Castro’s 26th of July Speech: “The Table Is Set for the United States” 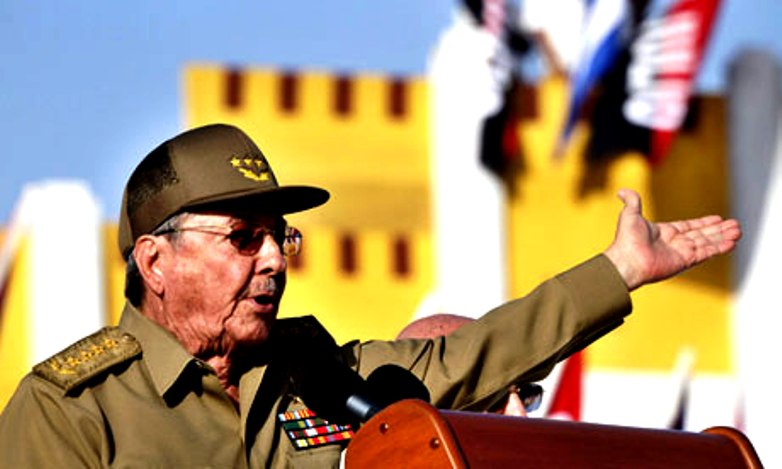 On Thursday morning, the 26th of July was celebrated in Gunatanamo province. The 59th anniversary of the assault on the Moncada and Carlos Manuel de Cespedes barracks went according to script with no great surprises. In Mariana Grajales Plaza in this eastern city, members of the government, local authorities and thousands of local people gathered. The main speech was delivered by José Ramón Ventura, first vice president of the Councils of State and Ministers. His words were marked by calls for anti-imperialism and calls for efficiency.

He delivered them like a man of the old guard, an octogenarian leader emphasizing the need to meet production plans and insisting on the Guidelines of the Sixth Communist Party Congress. His allocution was free of announcements, although popular rumor suggested — weeks in advance — the possibility of a decree regarding travel and emigration reform. A change longed for by Cubans who could travel outside the island without needing a permit to leave, what we call the “white card.”

Instead, the statements made at the ceremony focused more on the continuation of the current process. Only in the final minutes did Raúl Castro take the microphone and improvise a speech. From experience, Cubans know that unscripted words are often the most momentous. The general boasted that the ceremony had lasted only “55 minutes,” a clear contrast to the long events organized in the past by his brother, Fidel Castro.

He also stressed the need to raise productivity, without which it will not be possible to improve the current wage scales. Historical references also salted his time in front of the microphone. Meanwhile, the sun rose in the sky over one of the hottest areas of the country and the people remained standing before the words of the current president. This was the first 26th of July that was commemorated under the new rules of the Raúl regime, with the site chosen not in a contest between provinces but in their geographical order. The 60th anniversary, next year, will take place in Santiago de Cuba, where the Moncada Barracks is located.

The most controversial statement in Raúl’s speech was that if the United States wants “to talk, the table is set… If they want to talk about the problems of democracy, of freedom of the press, of human rights… we will discuss it… but under conditions of equality,” affirmed the man who for almost 50 years was minister of the Armed Forces.

This assertion comes at a time when the opposition has lost, physically, one of its main leaders, the layman Oswaldo Payá. Many of the dissidents surveyed by this writer for El Pais newspaper, expressed their displeasure with the fact that the Cuban authorities are disposed to talk about internal matters with a foreign government and not with the nonconformists in their own backyard.

But this is not the first time the current Cuban president has spoken of a possible dialog with his neighbor to the north. In reality, however, the official discourse continues to feed off confrontation with the White House.

This was, without a doubt, a 26th of July that will pass with neither pain nor glory.

This entry was posted in Blog and tagged President Raul Castro. Bookmark the permalink.