From the Toronto Globe and Mail: CUBA: Fifty years later, an agricultural revolution

For years the land lay fallow, swallowed by thorny weeds. Strangers called it a lost cause. Armando Aroche saw a golden opportunity.

It was 2008 and Raul Castro, in his first major speech as Cuban President, made a shocking admission: 50 years of state-controlled agriculture had failed, resulting in chronic food shortages. The island was importing 80 per cent of the food it subsequently rationed for public consumption.

Mr. Castro offered free, 10-year leases on idle land to anyone willing to try their hand at farming.

Mr. Aroche, a rotund, 53-year-old peasant, was among the first to queue in San Antonio, a small municipality a half-hour drive from Havana.

“I was not afraid of anything,” he recalled. He had a faint childhood memory of a well on the southwest corner of a particular stretch of land, which he requested. He was awarded 7.28 acres and named his farm “San Juan.” He borrowed his neighbour’s tractor and irrigation system and, against all odds, managed to coax 68 tonnes of sweet potatoes and tomatoes from the earth that year, which he sold back to the state at a profit.

Today, he gazes out on his fields from beneath his sunhat. Too much rain means his tomato plants are flowering. His 1952 Ferguson tractor is on its last legs. A team of oxen plow the land as if in slow motion.

But despite these hardships, farmers such as Mr. Aroche are being held out as shining examples of the new face of Cuban socialism. The cabbage, onions, carrots and lettuce he cultivates are described by government officials as the fruits of their “new and improved system” that has boosted food production by awarding more land to peasants who farm it for a profit. 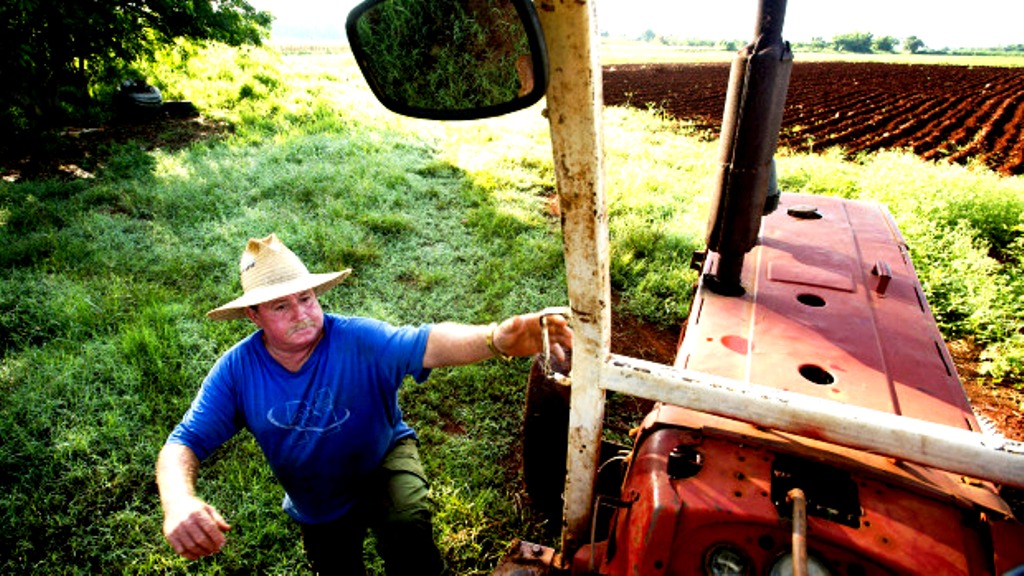 Since Decree No. 259 was passed in 2008, 170,000 peasants across Cuba have been granted land. In San Antonio alone, 410 people have applied for land with 283 of those applications granted.

“Pretty soon we will run out of lands to grant,” confessed Georgina Gutierrez Jimenez, president of the local chapter of the National Association for Small Farmers.

Each farmer can apply for a land grant of 13.48 acres. If the farm proves successful, they can apply for another. Farmers can also use their profits to buy their own equipment, insecticides and fertilizer – something the state used to strictly control. Each farm owner pays a 5-per-cent income tax to the state, and 3 per cent to the local agricultural co-operative.

Mr. Aroche, a trained mechanic, used to work at the “state enterprise of assorted crops,” and earned the equivalent of $9 a month. He demurred when asked about his income today, but acknowledged it is exponentially higher. For the past few years, his family has been able to afford long holidays on the beach.

He employs six workers, who are each paid a monthly wage of $12, plus a yearly bonus. They help themselves to food grown on the farm and often receive a small cash “tip” at the end of each day.

“There has been an enormous impact,” said Arturo Aleaga Cespedes, a lawyer with the National Farmer’s Association. He cites a 60-per-cent increase in the production of rice, milk, vegetables and root vegetables.

However, it’s still not enough to satisfy Cuba’s food needs.

“We produce a lot, but the demand and consumption are always increasing,” Ms. Jimenez said.

Another challenge is persuading a younger generation of Cubans to take up their leaders’ challenge and return to the land. Many, like Mr. Aroche’s own children, were educated for urban jobs in state offices that are under enormous pressure to trim their bloated payrolls.

The country’s public service is set to lose up to half a million jobs over the next five years.

Mr. Aroche’s 26-year-old daughter, Joseline, quit her job as an economist when her son was born three years ago. Now, as she contemplates returning to the work force, she faces “not a lot of options,” she said.

Her father believes the future of his family, and that of his country, lies in the land: “To work in the field is very hard. It’s something most people don’t like, but it’s work that needs to be done,” he said.

The agricultural reforms – considered radical at the time – have proved to merely foreshadow larger changes sweeping through Cuba as the government relaxes its communist grip on everything from private enterprise to real estate in an attempt to generate revenue.

“The only problem is that all of this should have been done sooner,” Mr. Aroche added.

This entry was posted in Blog and tagged Agriculture, Economic Reforms. Bookmark the permalink.

One Response to From the Toronto Globe and Mail: CUBA: Fifty years later, an agricultural revolution