“The Economist” on Taxes in Cuba: Get used to it

The Castros’ subjects get acquainted with that other sure thing 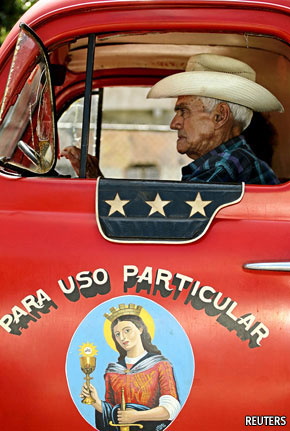 Half your monies are belong to us

WHEN Raúl Castro, Cuba’s president, announced last year that the government would cut its payroll by up to 20% and promote self-employment, state media hailed the birth of a “tax culture”. As most Cubans had never paid income tax, the Communist newspaper published a guide to the concept. Government economists predicted a 400% increase in tax revenue from individuals.

The experiment has been bumpy. Last October Cuba published a tax code for workers in its 181 newly authorised occupations, ranging from furniture repairer to professional clown. As in the early 1990s, the last time Cuba tried economic liberalisation and taxation, the rates were punitive: 10% on turnover, 25% for social security and up to 50% on income. Such levies discouraged some people from risking self-employment. By May applications for job licences were tailing off.

Moreover, Mr Castro failed to beef up the National Tax Administration Office (ONAT), which was soon overwhelmed by filings. That has delayed revenue collection, and allowed both intentional and inadvertent tax cheats to go unpunished. “They seem even more confused about this than we are,” says Ernesto, an engineer who obtained a licence to set up a plumbing business in March. He admits that he simply guesses how much he has earned each month and declares a tenth as much.

But Mr Castro seems more flexible than his brother and predecessor Fidel, who blamed the self-employed for sowing inequality and happily taxed private firms out of existence. Eager to find jobs for up to 1m public workers he plans to fire, he has carved out exemptions from the social-security tax and twice increased the scope for deductions. He has also ordered ONAT to retrain its staff and hire new inspectors. “There certainly is an element of making up the rules as they go along,” says one European diplomat based in Havana. “But Raúl seems totally determined to make this work.”

Further reforms are on the way. By the end of 2011, Cubans will be allowed to buy and sell homes and cars. It remains to be seen how long they will accept taxation without representation. “They happily take our taxes,” says Michel, a barber who recently founded a business. “But they still keep their secrets.”