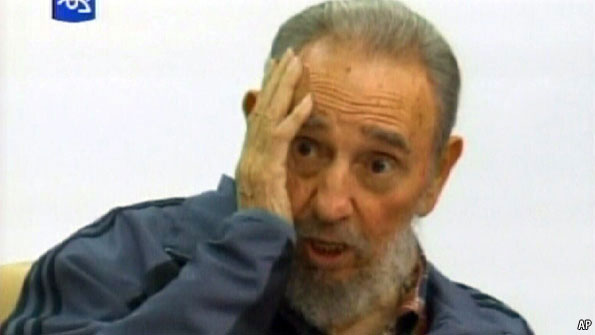 On Wednesday September 8, former President Fidel Castro was quoted as saying: “The Cuban model doesn’t even work for us anymore”, when asked if Cuba’s economic system was still worth exporting to other nations, by Jeffrey Goldberg, of The Atlantic. A few days later, Friday September 10, Fidel said that it was a misunderstanding though Jeff Goldberg and Julia Sweig insisted that this is what he said. Had Fidel been experiencing a “Senior Moment?” Had he been speaking in jest- a throw-away line in a jocular conversation, but also revealing concerning his legacy to Cuba and the world? Was he misunderstood or misheard or mistranslated?

Then on Monday September 13, the Pronunciamiento de la Central de Trabajadores de Cuba announced the new policy on lay-offs in the state sector and expansion in the self-employment and cooperative sector employment. This statement outlines a new direction for the Cuban economy, namely towards greater reliance on the market mechanism, private ownership and entrepreneurship and a reduced role for the state and (attempted) planning. Cuba already had a “mixed economy” with a substantial private sector in agriculture and some 143,000 in non-agricultural activities, not to mention all those in the underground economy. However, the statement by the Cuban Federation of Labour indicates a major shift of emphasis towards a more marketized, decentralized, private-sector economy. This shift in direction for the Cuban economy negates all that Fidel has stood for regarding the economy in the past. Fidel was responsible for

President Raul Castro’s new approach instead is placing its faith in the small enterprise and cooperative sector, hoping that these will to come to the rescue of the economy by absorbing the underemployed labour in the state sector to be laid off in the next six months. . This is strong confirmation that President Raul Castro himself is convinced that the Cuban model is not working any more – if it ever did. It also is likely that the Communist Party and the National Assembly will not contradict Raul on this. I argued earlier that none of the variants of the “Cuban Model” had worked effectively. (The “FIDEL” Models Never Worked; Soviet and Venezuelan Subsidization Did) Many foreign analysts and observers had of course questioned the value of Fidel’s legacy in the economy as well as politically and in terms of human rights. It now appears that Fidel’s legacy is questioned by his own Government. President Raul Castro has implicitly rejected Fidel’s life work regarding the economy of Cuba.

A Difficult Day – and Situation – for Fidel

Fidel Castro allegedly said to the judges in his famous 1953 speech in his own defense at his trial after the unsuccessful attack on the Moncada army barracks “Condemn me, History will absolve me.” However, “History” will not absolve Fidel. It appears also that even the official versions of “history” under Cuba’s current Communist system will not absolve Fidel either. Small wonder that he is attempting to portray himself as the elder statesman, altruistically offering advice and warnings on international issues, many of which appear to him to be apocalyptic in character. How will Fidel respond to the official Cuban rejection of his vision of “socialism” that he has been attempting to impose on Cuba for almost half a century? . PS. It is instructive that the labour federation, the CTC, is placed in charge of implementing the lay-offs on the part of the government rather than trying to defend the interests of the state sector workers. This pretty much confirms the view of the CTC as an arm of the regime not an organization to defend workers’ rights and interests.